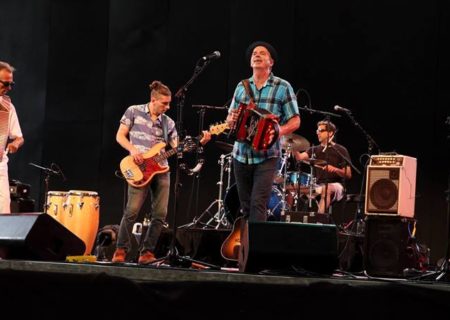 Cats On Holiday is a Roots-based, Swamp Pop band that has been pleasing audiences for nearly 20 years with their own special blend of Texas and Louisiana inspired Blues, Rock, Roots & Zydeco, infused with healthy doses of original songs and poetry about urban life. They perform throughout the year at the best live music venues in Northern Ohio, upstate New York and the Lake Erie Islands. Cats On Holiday are booked annually at almost all of the major outdoor venues in the region, and are regulars at Parade the Circle, Hessler Street Fair, Wade Oval Wednesday, and Lock 3 Live. In recent years the Cats have had the pleasure of playing the legendary Great Blue Heron festival in New York.

Further South, they have worked at The Akron Art Museum, First Night, The Harbor Inn, Boston Mills Art Festival, Taste of Hudson, Hudson Summer Nights, as the resident band for the annual Towpath Marathon, at several nightclubs in Kent, and on the Kent Stage as part of the Kent State Folk Festival.

Cats on Holiday are frequent guests on the Fox 8 News in the Morning, Applause, and Sound of Applause television and radio shows, and work regularly for Downtown Cleveland Alliance, City of Cleveland, Cleveland Metroparks, and various municipalities. They were featured at the Republican National Convention Kick Off Party at the Rock & Roll Hall of Fame, played a private party for the Louisiana Delegation and performed at the post-convention Appreciation Day.

Known for accessibility, audience engagement and professionalism, the five piece ensemble guarantees a good time. “You worked hard this week, so come on down and dance some!”